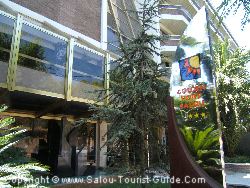 The Golden Port Salou Park Hotel is more commonly known as 'Golden Port Salou'. It is in a relatively peaceful area of Salou. Upon entering I found the style of the hotel was reminiscent of the 1970s, but the pool area is attractive and the pool is a good size. There's plenty of space to sit in the sun and there's also a little beach hut style pool bar.

Bus Transfers to / from Salou

Bus Transfer from Reus Airport to / from Salou

Bus Transfer from Barcelona Airport to / from Salou

Private Transfers to / from Salou

Private Transfer from Reus Airport to / from Salou

The reception has vending machines for drinks and snacks and there's a post-box. The hotel has entertainment every night which is usually a singer or comedian. 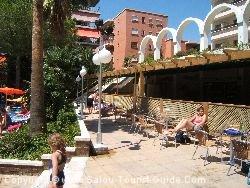 The Seating Area At The Golden Port Salou Hotel

There are two restaurants. One is for snacks, burgers and chips and the other has more substantial meals.

The swimming pool has quiet music playing and there are lots of comfortable sunbeds. There's a spa, gym and sauna and archery and volleyball are also available.

The hotel is great for families as it runs a children's club and there's a disco and entertainment in the evnings.

Facilities For the Disabled

The Golden Port Salou Park Hotel has rooms that the receptionist told me are suitable for use by disabled people. The rooms have a bath as opposed to a shower. 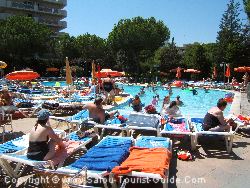 The Pool At The Golden Port Salou Park Hotel

There are 348 rooms and they all a have en-suite bathroom, balcony, air-conditioning, hairdryer, piped music, telephone and central heating.

The view opposite the hotel is across a road to pine trees.

It's about a 10 - 15 minute walk to the sandy Llevant beach. Opposite the hotel is a campsite, which is nice because it means that the view isn't just of other hotels as it is in so many other areas of Salou. It's also a 10 minute walk to find the nearest shops.

Port Aventura theme park is a 10 minute drive away, together with the water park called PortAventura Aquatic park, which is right next to Port Aventura.

There are 4 gold courses within a 30 minute drive of the Golden Port Salou Park Hotel.

How To Travel From The Airport To The Hotel

Via Taxi: A taxi from the airport should take about 30 minutes. The journey time depends upon traffic which will be heavier during August as it is peak season.

Via bus: There's a bus that leaves from outside the arrivals lounge and travels to Salou via La Pineda (which is a neighbouring resort). The bus does a round trip back to the airport again. The journey to Salou should take about 35 - 40 minutes.

The Golden Port Salou Park Hotel is far enough away from the hectic nightlife of Salou to offer peace and quiet, but still near enough to enable you to walk into the centre of town if you so desire. One good feature of the hotel is that it is opposite a campsite, which means that it benefits from views of pine trees instead of views of more hotels.

Learn how to reserve your airport transport to guarantee your place on the bus.

How to arrange bus transport from Reus Airport

Our guide will show you everything you need to know to book a private transfer from Reus Airport.

Click here to learn more about arranging your private transport.