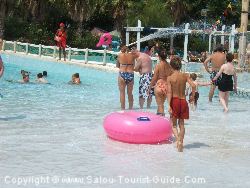 The Port Aventura Water Park Is Only A 15 Minute Drive From Salou
Sitting in the middle of the Costa Dorada is the resort of Salou. It's 50 miles (80km) south of Barcelona down the coast, and six miles (10km) south of Tarragona.

In Spain many regions have their own language. In addition the people speak Castilian Spanish, but in Salou they also speak Catalan. For this reason you'll see certain names written in 2 different ways on signposts and maps. The Costa Dorada can also be spelt Costa Daurada. Both names refer to the stretch of coastline that includes both Tarragona and Barcelona on the east coast of Spain.

The Resorts Next To Salou

Along the Costa Dorada, either side of Salou are the resorts of La Pineda to the east and Cambrils to the west. These resorts also have picturesque sandy beaches. They are quieter than Salou in terms of nightlife, and I am told by a local resident that Cambrils in-particularly is more exclusive.

Which Type Of Tourist Will Enjoy Salou 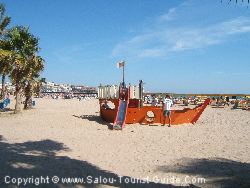 The Beach In Salou Has Plenty To Do For Children

Salou is a Mecca for both families and youngsters seeking nightlife. It's big enough to accommodate both types of tourists and has a central area full of nightclubs and bars, in addition to a quieter end near the port where you'll find tapas bars and more traditional Spanish restaurants.

The Costa Dorada, and Salou especially is good for families because of its close proximity to the Port Aventura theme park.

The nearest airport to Salou is Reus airport. It's a small airport about 15 - 20 minutes drive from Salou, and it receives a lot of Ryanair flights. This makes it an affordable place to fly to as Ryanair is a budget airline and they have some great deals.

Reus airport only has 2 terminals: one for arrivals and one for departures. It's really easy to find your way around.

The Costa Dorada has long been established as a popular holiday destination for people from all over Europe because of its mild climate and many attractions, including the long sandy beaches. Salou is particularly appealing because it's close to the Port Aventura theme park and PortAventura Aquatic Park. Both these parks are great for families. Salou can also offer really good nightlife and many of the visitors are young people looking for wild nights on the tiles.