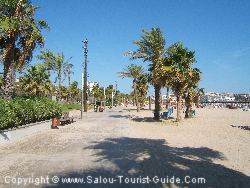 The Llevant Beach In Salou Has Plenty Of Space Even In August
The main beach stretches either side of the port. To the East it's called the Llevant and to the West it's called the Ponent. In Spain there is a flag system on the beach to tell bathers when it's safe to go into the sea. A red flag means that you cannot enter, A Yellow flag means enter with caution, and a green flag means it's perfectly calm and safe to go in. the reasons that you may be advised not to go in the sea are usually because it is too rough, there are strong currents, or sometimes because there are jellyfish.

A Guide To All The Beaches In Salou 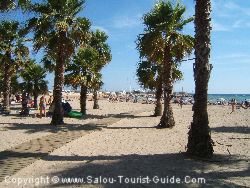 There are 2 large sandy beaches and several smaller coves in Salou.

Starting to the west of Salou there's the Ponent beach. This is a long and spacious sandy beach that is popular with families. There are facilities dotted along it like cafes, showers and toilets, and there's a lifeguard patrol. 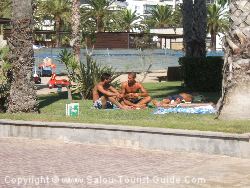 Next To The Llevant Beach In Salou There's A Grassed Area

Following this you pass the port and come onto the Llevant beach. This is much the same as the Ponent and has plenty of facilities. There is also a beach carpark near the port.

There's a walkway that runs parallel to the beach and behind that is a grassed area with palm trees. This is a popular spot for people to have picnics.

West Of Salou In Cap Salou 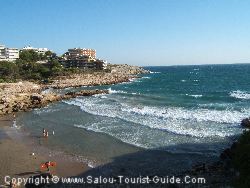 A ten minute drive out of Salou to the west is an area called Cap Salou. There are 3 little coves here that have lifeguard facilities and are next to a backdrop of mountains with pine trees. This is a very picturesque area. You will have to drive to get there from the main part of Salou, and it is quite a hilly area so you will have to walk down quite a few steps to get to the beaches.

The beaches in Salou are great for families as they are sandy and spacious and have lots of facilities such as play areas. There's plenty to do for people who like sport, and the sea is great for swimming. The flag system means that you can rest assured you will only enter the water when it is safe to do so. There's also lots of café bars on the beach, so you don't have to leave if you want to eat.