This page is a guide to Salou nightlife. You'll find a description of the main area for going out dancing and drinking. There's also advice for where to go out in the evening for families. There's an explanation of how to choose the bars with the best prices and a guide to the opening and closing hours of the bars and clubs.

Nightlife during the summer, and in particularly in August, is hectic. The main 'going out' area is Carlos Buigas. It runs from the end of the beach and is lined with fun bars and clubs. This street and the immediate surrounding area is known locally as 'Slammers'. It is full of people in their 20s who are looking for a night of drinking and dancing.

Salou nightlife attracts an international crowd of tourists and you'll see Dutch, French and English people everywhere. Typically people start to go out as soon as the sun has gone down and the clubs stay open until dawn.

Remember that the measures of spirits are much bigger in Spain than in the UK. If you want to party all night you have to pace yourself!

Nightlife Can Also Be For Families

Don't worry about taking the children out in the evenings. Dotted amongst the bars and clubs are plenty of ice-cream parlours and family restaurants. If you fancy somewhere a little less frenzied that the street of Carlos Buigas, then head for the opposite end of the Levant beach to where the pot is. The street of Calle Barcelona that stretches back from here has some quaint Spanish tapas bars and restaurants. For the biggest concentration of eateries, pass over the railway tracks and walk another 10 minutes.

You'll see staff from each of the bars and clubs standing outside with tickets and flyers. These are the 'touts'. Their job is to promote the bar and get customers to go in and drink. They will approach you and tell you that you can get cheap drinks, or two for the price of one in their particular bar. They were mainly dressed in costumes or fancy hats when I visited, although some are dressed in 'civilian' clothes! 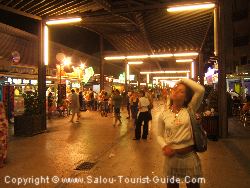 You don't have to take notice of all of them - there are too many! At the end of the day all the prices are more or less the same wherever you go and you'll generally get a free shot or a happy hour price in most bars. What the touts tell you is just a gimmick to get you in their bar. They generally work on commission and so they'll be very charming and flirtatious with you if they think it's going to get you to spend your euros with them.

The best thing to do is to take the flyer or ticket they give you and tell them you'll come back later. Otherwise you'll get no say in where you go for the evening and will be dragged into the bars that the touts want you to go in. Salou nightlife goes on until the early hours. You have all night to explore, so take your time and look around first.

Bars And Clubs In Salou 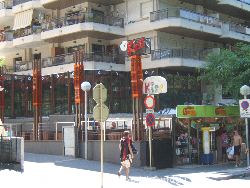 On the main street of Carlos Buigas you'll find Kiss. This is a well known club that is good for dancing. It has the benefit of being next to all the bars and so you don't have to wear yourself out walking. Another famed club in Salou is Pacha. There are an immense number of Irish bars. One that is particularly popular is Murphy´s Sports Pub. It's near to the main drag and it's good to visit at night or during the day for food. 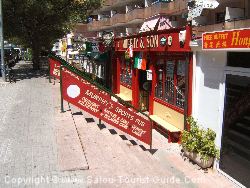 Murphys Irish Pub Is A Popular Spot In Salou

For more information see our page on Murphy´s pub in Salou.

Guide to Nightlife in Salou